This year I had the pleasure of designing, building, and shooting this wrestling ring pin up set for our client Laura as a gift for her partner's 40th birthday this December. Laura came heavily prepared with what wrestlers she wanted to portray (Rick Flair, Macho Man Randy Savage, Alexa Bliss, and The Ultimate Warrior) and fully committed to not only curating the perfect wardrobe for those characters, but portraying those characters accurately in front the camera, which made that part of my job super easy. The tricky part was designing a wrestling ring that could easily be taken a part, stored, and thrown together in the small studio room that I shoot out of in my 1922 home. 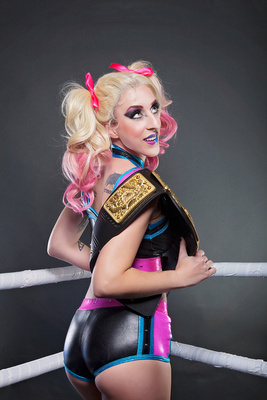 I decided that a corner would probably be the most recognizable part of the ring without having to photoshop a ton of other indicators into the background. I’d rather keep photoshopping to an absolute minimum, so making sure the majority of the elements of an image are in front the camera when the photo is shot is essential for me. I knew that the final image was going to be pretty simple, but the logistics of figuring out how to put this ring together was going to be a challenge. 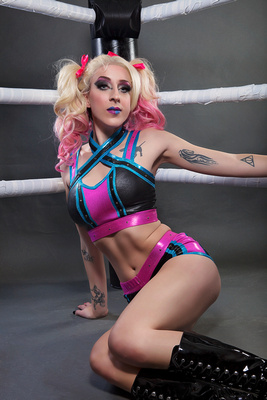 I did my usually little “Blue’s Clues” looking sketch on my computer (which unfortunately I don’t have anymore),  went to Lowe’s and just started looking for bits and bobs that I thought my work. For the main post, I landed on using an 8inch wide, thick cardboard, cement tube. I believe these are mainly used to help with putting in fence posts and other braces that need to be secured with concrete in the ground, but there were a couple size options in the cement aisle. For the ropes i used a combination of foam tubing used to insulate plumbing, some extra half inch PVC pipe I had in my basement, and duct tape. With help from my own partner, I took some PVC pipe corner brackets, and secured those to the cardboard tube with a piece of wood on the inside to add some extra support, and some long bolts. The “ropes” easily could be fit into the PVC corner brackets, which we camouflaged by adding corner “pads” made of some foam I found at Joanne’s, and some extra black semi-shiny fabric we had in the house already. Since “ropes” weren’t connected to another corner of a ring on the opposite end, I just used some extra light stands I had in my studio to support them so they stood out straight. 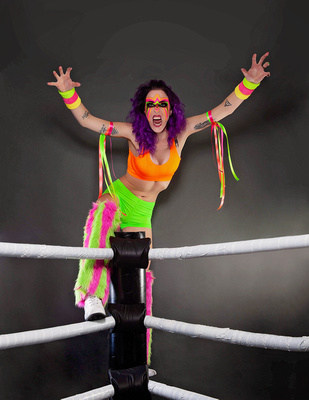 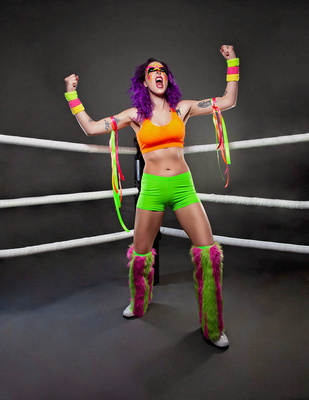 I’m sure all of that was very confusing, but I hope you could follow along. Of course on the day, Laura brought the energy needed to make this whole thing work!

In addition to the ring, we also utilized a simple blue background to recreate this iconic interview with Macho Man Randy Savage. For this I built a classic WWE microphone, and found an excessive amount of Slim Jims. Weirdly, I'm assuming because of recent supply chain issues, everywhere was sold out of these little meat sticks, so I paid a bit of a premium to get 240 of them off Amazon, but again...worth it. 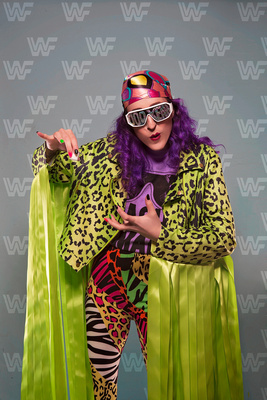 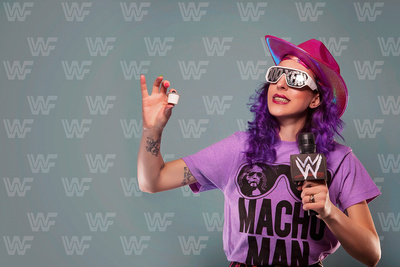 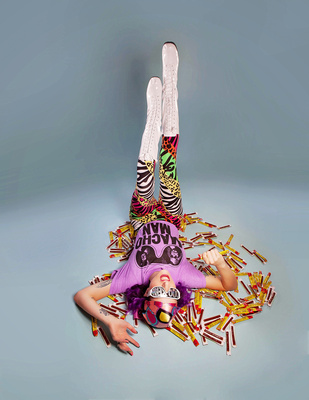 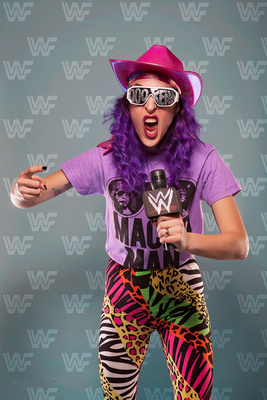 Laura made that fringe on  that amazing jacket by the way! How freaking cool is that? 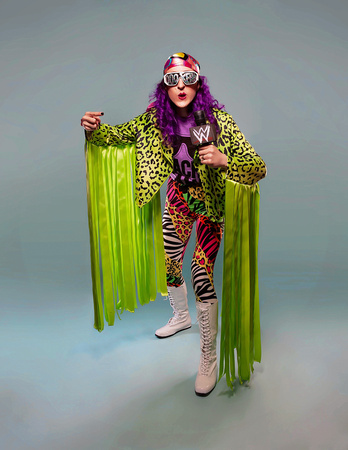 And that's pretty much it! I plan on reusing this wrestling set in the future for anyone who wants to recreate one of their favorite wrestlers as a pin up cosplay, or maybe I'll repurpose it as a boxing set, who knows!  Custom set packages start at $800, but final price is dependent on what you are looking for.
If you are interested in doing your own custom session, shoot me an email through the contact page here on my website! I'd love to discuss your vision!